Mr Bean at the Olympics

If you missed the opening ceremony for the 2012 Olympic Games, then the best part was when Mr Bean joined the London Symphony Orchestra to play Chariots of Fire.

Posted by Unknown at 8:05 AM No comments:

An Englishman, a Scotsman, an Irishman, a Welshman, a Latvian, a Turk, a German, an Indian, several Americans (including a Hawaiian and an Alaskan), an Argentinean, a Dane, an Australian, a Slovak, an Egyptian, a Japanese, a Moroccan, a Frenchman, a New Zealander, a Spaniard, a Russian, a Guatemalan, a Colombian, a Pakistani, a Malaysian, a Croatian, an Uzbek, a Cypriot, a Pole, a Lithuanian, a Chinese, a Sri Lankan, a Lebanese, a Cayman Islander, a Ugandan, a Vietnamese, a Korean, a Uruguayan, a Czech, an Icelander, a Mexican, a Finn, a Honduran, a Panamanian, an Andorran, an Israeli, a Venezuelan, an Iranian, a Fijian, a Peruvian, an Estonian, a Syrian, a Brazilian, a Portuguese, a Liechtensteiner, a Mongolian, a Hungarian, a Canadian, a Moldovan, a Haitian, a Norfolk Islander, a Macedonian, a Bolivian, a Cook Islander, a Tajikistani, a Samoan, an Armenian, an Aruban, an Albanian, a Greenlander, a Micronesian, a Virgin Islander, a Georgian, a Bahaman, a Belarusian, a Cuban, a Tongan, a Cambodian, a Canadian, a Qatari, an Azerbaijani, a Romanian, a Chilean, a Jamaican, a Filipino, a Ukrainian, a Dutchman, an Ecuadorian, a Costa Rican, a Swede, a Bulgarian, a Serb, a Swiss, a Greek, a Belgian, a Singaporean, an Italian, a Norwegian and 2 Africans walk into a fine restaurant.

"I'm sorry," says the maître d' after scrutinizing the group, "You can't come in here without a Thai."
Posted by Unknown at 8:08 AM No comments: 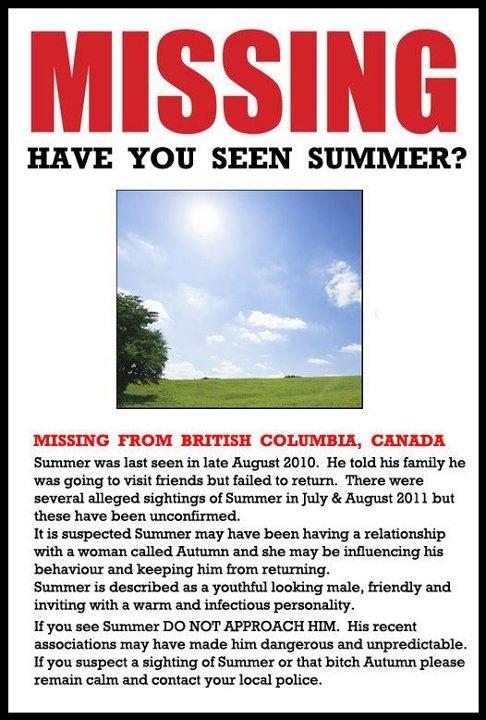 Email ThisBlogThis!Share to TwitterShare to FacebookShare to Pinterest
Labels: Summer

Email ThisBlogThis!Share to TwitterShare to FacebookShare to Pinterest
Labels: Summer

Stand up for the new Canadian National Canthem.
Yes you read that that right.

Submit you humor. If it makes me laugh I will post it here. Click the tab at the top of the page, or email me at:
humor@glenlancaster.com